Cycling for Humanity from Hyderabad to Tirupati (Day 1)

Cycling for Humanity from Hyderabad to Tirupati (Day 1)

With all your good wishes and support, today’s camp went on well.Most of the volunteers day started at 4am, reached starting venue Gachibowli by 5:30am in heavy rain. Yesterday we could complete printing of pamphlet, banners, play cards with CFH messages etc. some motivational books, Manavata note books also loaded.

Later, we have reached Sivarampalli school near Armghar by 7:45am. About 15 minutes Srini took session for the children at BC hostel. After the session when used their toilet, the condition is not good, Srini has managed to clean one and asked children to clean rest of them, explained them about sanitation.

Sivarampalli session started at 8:45am after their prayer assembly in the ground on nice morning weather. Around 800 students in this school. One hour session on personality development, Srini explained about Humanity, Nature, Health, importance of samskaras and social responsibility. They all well received. Srini has given real life examples to make them understand.​

Later Srini has organized meditation and prize distribution. Time management and health management in our note books explained and given to top students. All promised to follow the human values and do their duty for their parents and society. Teachers and whole school got pin drop silence and everyone was so happy with the inspiration and positive energy they got from this session.

Later Srini started cycling to Rajendranagar Agri University, met with Dean and professors along with their students. They all well motivated and received in the campus. Gave short message there about our objectives for humanity and this cycle Yatra. They all took autographs asked me to come again to take next session. They expressed interest to develop themselves as real humans, lead life by example.Later we cycled to Balanagar via Samshabad and Shadnagar. It was bit touch due to opposite wind, took bit longer time. As Srini cycle tire was punctured, he took other’s cycle to continue, as other volunteers cycled upto Aramghar and went back.

Later Sivashankar garu organized Balnagar Girls Residential School and college session. Srini reached there at 3pm and started session. Around 2 hours Srini took session here for 300 students of inter, 10th, 9th and 8th students. Explained about value and energy / shakti of women and how his mother lived as ideal mother and with real life examples, Srini asked them to be present and solve their problems and help their friends to build good character. Also covered health & environmental science for them. They all very intelligent and obedient students though they came from very poor families. Well received and inspired to make today as their transformation day in their life. Later Prakash & Chandra made my cycle repair and got plants also to deliver at school by 5pm. After unloading 200 plants for the school students and teachers were so excited to make their campus green. Each student happy to adopt one tree.

Later Srini cycled to Jedcharla reached around 7pm at Lalithambika Tapovanam ashramam. Delivered plants there, some plants for mahaboobnagar goshala. After fresh up, we attended meditation and prayer at temple. Discussed with Sarveswaranda. 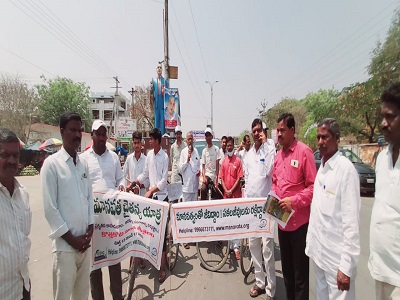 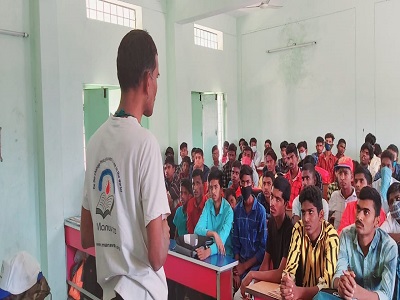